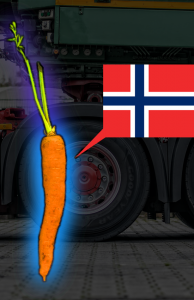 Olaf could hardly see where he was going. It’s a wonder his 18-wheeler didn’t sail off the cliff. But at least the one consolation was that if he did, he’d likely be feeling no pain; a bottle of good old American Jack Daniels sitting next to him made sure of that.

Like any good Norwegian, Olaf had a strong Protestant work ethic. Unfortunately, three-quarters of the time said work ethic, as well as Olaf, were thoroughly pickled. And though he made the 100 Km freight haul between Trondheim and Steinkjer three times weekly, it was a wonder he made it at all. No doubt an ancient Viking was looking out for him. Either that or his Jack Daniels. Beats mead.

And today was no different. Monday was shoes, Wednesday was a load of car parts, and today – a full load of Norway’s finest carrots, bound for the Veldig Godt Juice Company.

“Blecchh. Hate carrot juice,” the burly Scandinavian said, as he lovingly caressed the bottle of whiskey on the seat next to him, with an adoration that was slightly unsettling. “God bless the Americans,” he murmured proudly, as he took another swig.

And on he sped toward Steinkjer – or rather, weaved – kicking up stones. They sailed over the mountainous road and into the Norwegian Sea far below.

Pulling into the city Olaf slowed down just a bit, to glance at the invoice clipboard next to him. But first – another swig. “Hmmm, let’s see – Veldig Godt Juice Company. Empty load into vat #11, it says.” He moved the clipboard closer, then farther away, in a vain attempt to discern the address. “If I find the people that keep making the print smaller on these damn things, I’ll kill them myself!” he complained. The in and out motion was making him queasy. And then he promptly threw up on the invoice. It wasn’t the first time, and it probably wouldn’t be the last. “No problem,” he slurred. “I know Steinkjer fackwards and borwards. I’ll find the damn place. How hard could it be?” 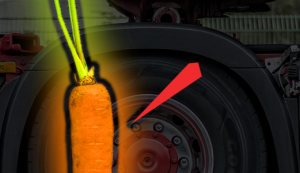 And somehow, by the grace of God, or Leif Ericson, he found it.

He backed up to the loading dock, and sure enough, there was a vat labeled #11. This had to be the place.

His load of carrots dumped into vat #11, Olaf got back in his truck and left. With any luck, he’d make it home.

Workers milled around, supremely unconcerned. After all, deliveries arrived every day, so they paid this one no heed. Besides, it was now 5:00, quitting time. What did they care what was dumped into the vats? It could have been their spouses or mothers-in-law, for all they cared. And some fervently entertained that idea anyway.

And as the sun slowly went down over the Norwegian fjords, and vehicles hastily left the employee parking lot, the corporation’s brightly lit sign blinked off for the night. Pity that Olaf had been too soused to see it. Would he have cared that it said V.G.J. GENETICS COMPANY? Same letters, right? Who cares? Certainly not him, even if he had seen it through his Jack Daniels-induced fog. Should you? Probably not. Then again…

For beginning at midnight, in the darkened plant, while crickets chirped and birds flew on silent wing through Scandinavian climes, something very strange indeed began to happen in vat #11. Bubbling, gurgling; and what was that strange glow? And that bizarre smell? This was juice? Oh, most assuredly not. Not this time. This particular vat began to glow brighter, with a sickly orange hue. And whatever was within it began to grow hotter and hotter. Green and yellow sparks began to emanate from the top of the vat. And the sounds that issued from it – oh those sounds!

And at 4:00 AM – something began to scale the confines of the vat! It slithered, it crawled; it crept up, up the polished aluminum vessel, until it clambered over the top – and fell to the floor!

At 8:00 AM the research scientists and employees of V.G.J. Genetics Co. arrived at work, just as they’d always done; trying to unlock the secrets and potentials of recombinant DNA, and attempting to create new hope for the human species – or unleash an unknown nightmare. What two senior technicians came face to face with may not exactly have been said nightmare – but it came damn close.

“Hva er dette! What is this?” one shouted.

“Guri! My God!” the other technician yelled.

For there, walking upright towards them on two tiny fibrous legs – was a carrot! “Kan du hjelpe meg?” the carrot said in perfect Norwegian. But of course it did. After all, this was Norway. If it had spoken Mandarin – now that would be just plain weird.

The two technicians were in shock. Whatever it was, they had to hide it – fast. No need to cause a panic. At least not yet. They’d figure it out in their lab.

Hans scooped up the genetically-transformed carrot, slipped it into his lab coat pocket, and ran to his office, his colleague Sven right behind. “I’ve got salad fixings mumbling in my pocket!” he said to Sven, as they raced to their office. “This is nuts!”

“No, this is insane! What the hell is senior staff experimenting with out there? And why? Now I have images of talking pistachios stuck in my head!”

“You can just add the carrot to the salad mix,” Hans answered sarcastically.

They arrived at their office lab out of breath. Hans took it out of his pocket and placed it on his desk. They both stared at it without saying a word. The carrot stared back at them.

“Why can’t we just throw it away?” Sven suggested.

“Of course it’s inhuman, you fool! It’s a carrot!”

“We have to tell Dr. Neilsen,” Hans finally announced.

“No! Not yet. He’s still in hospital, recovering after that – unpleasant incident. The less stress for him right now, the better.”

It startled the both of them, and they stepped back a distance.

“It’s also orange, with a flowing green stalk. Good God, man, why are we talking like this? It’s a damn carrot, for Christ sake!”

“Well, what are we going to do? We can’t tell anybody about this. The government will be on us so fast we won’t know what hit us. Our jobs are on the line here.”

Hans had a thought. “Wait a minute. I have an idea. I have a colleague, Dr. Steven Palmer; a good friend in America. He’s a fellow scientist I know I can confide in. I can call him on Skype. It’ll be secure.”

Suddenly, the carrot spoke up again. “Det gjor vondt her.” He began waving his stalk.

“Idiot! I’m Norwegian. I know what he – it – said.” He looked back at the carrot. “Hmmm, it’s waving its stalk. Maybe that’s where he’s hurting.” And he slowly approached it. “I won’t hurt you.” And he gently caressed its green stalk. Within a few seconds it stood up straight and stiff.

“Well, I guess that confirms its sex,” Sven said quietly. He thought Hans would turn green himself.

“Oh that is so wrong on so many levels,” he said. “And yet…” And he had a far-off look in his eye. “This genetic freak of nature can be our ticket to fame and fortune! Think of it: you and I are now the owners and guardian of the world’s only talking carrot. And so far, it’s just you and I. And we’ve got to keep it that way. But we have got to know more about it – how did this happen? What is its genetic makeup? And what other properties does it possess? And the only way we can learn more about our orange and green friend here is from an outside source. And that’s where Steven Palmer will come in! We’ll freeze our veggie friend, ship it to him, and swear him to secrecy.”

“Can we trust him?” Sven asked.

“I’ve known Steven for years. I did my graduate work with him at Harvard. Once he analyzes a tiny sample in his firm’s electron microscope, he’ll ship it back to us, we’ll thaw it, fill Steven in on what the carrot really is, then offer him a partnership. We’ll all be rich!”

“How much will you tell him when you speak with him?”

“As little as possible. But if I know Steven, it will be a scientific puzzle he’ll find irresistible. Besides, he owes me a favor.”

“But how will he not know?” Sven asked. He’ll see the fibrous legs, and my God, if it speaks to him…!”

“After I Skype him, we’ll send him a whole bunch of Norway’s finest carrots. We’ll conceal our orange friend in the middle to avoid any suspicion from anyone. It’s vegetable, not animal. We can freeze it to put it in suspended animation. That will keep it quiet. Then we’ll tell him everything.”

“Sounds like a plan. Well, it’s now or never. Get our talkative vegetable to shut up. "

They retrieved the talking carrot from the desk drawer, and began to freeze it. But before it went to sleep, it looked up at Hans and Sven. “Det er kaldt.”

Sven gave his colleague a withering look. “I swear, if you do that again, so help me God… I know what it said!”

And so, with the unnamed talking carrot safely in frozen sleep, they bound it – or him – within a bunch of other carrots. Soon he was winging his way to the shores of America.

Hans and Sven were understandably nervous as the days went by; their orange and green ticket to fame and fortune many thousands of miles away. But finally – finally – they received an email from their friend, and hopefully new partner, Dr. Steven Palmer.

Still waiting for your mysterious anomalous sample for my analysis. Looking forward to it. But thank you for the kind gift of those excellent Norwegian carrots you sent me! I don’t know what genetic cross-breeding you do on them, but they made the best carrot cake I’ve ever tasted!

PS – Why do I have such an urge for lutefisk? I hate cod.

"I’m a graduate of Northern Arizona University, in Flagstaff, Arizona. I was born 2/24/49 in New York City, and raised on Long Island, NY and South Florida (though not in separate pieces!). I’ve been published in various genres, and have two novels on Amazon – “The Healer”, about the Face on Mars, and “Cherries in Winter”, a time traveling adventure concerning an F-22 Raptor pilot that suddenly finds himself transported to a Royal Flying Corps airfield – in 1916!

"I live in Tucson, Arizona, land of breathtaking natural vistas, and brain-boiling summers."

Due to a bureaucratic mix-up, you have just been appointed Czar of all Mammalian Nutrition. What is your 1st edict?

Anyone buying or eating either Christmas fruitcakes or liver & onions shall be permanently banished to the most habitable planet orbiting the Proxima Centauri star system.

Anyone buying or eating either Ring Dings or Ding Dongs shall be immediately canonized by the Vatican.

What is the metaphysical meaning of Times New Roman, and is font abuse a crime that shall have a corporeal punishment?

The meaning of Times New Roman is that the ancient Romans hated The Times as much as I do. And though you can’t have corporeal punishment, since your soul is immortal anyway, corporal punishment is fine with me, and I’d attend – as long as a lunch is provided.

Markusspiske and Tama66 are visual artists on Pixabay.

Our very own D Chang is a designer and game writer from Austin, Texas. His short fiction has appeared in Avast, Ye Airships! and the Cryptopolis science fiction anthology, and he has a janky retro JRPG on Steam. He does the Space Squid illustrations, editing, and other squid stuff.